Brazilian football star, Neymar could be cleared of the rape accusation levied against him within days over lack of more evidence from his accuser. 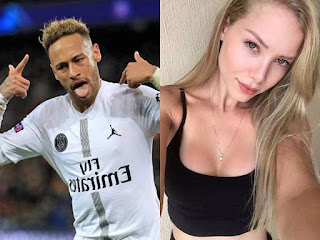 According to Mail Online, the accuser, Brazilian model Najila Trindade Mendes de Souza has been informed by her lawyer that she faces seeing her case against the Paris Saint-Germain star collapse except there is more evidence. She also faces losing the second lawyer to represent her after he said he could not carry on if his professional ‘trust’ in her was compromised.

Trindade's attorney Danileo Garcia de Andrade said he still believed Ms. Trindade had a case, but he would step aside if there was a lack of evidence.

Mr. Daileo said he had given her a deadline to produce the video and photographs she claimed to have had which would help prove her allegations of rape against the Brazilian superstar. But if the evidence was not forthcoming, he said, he would drop the case next week

Trindade who appeared on Brazilian TV, news station SBT for the first time last week, said she was the victim of 'aggression and rape' by the Paris Saint-Germain player in a hotel room in the French capital on May 15.
She claimed the encounter started out consensual but quickly turned violent, leaving her with bruises and scrapes to her legs and buttocks, with Neymar refusing to stop.
She told police her tablet containing a seven-minute video, messages and photos she alleged incriminated the footballer, was stolen in a burglary at her apartment. But the authorities said they found no major signs of a break-in and only Ms. Trindade’s fingerprints and those of her maid and friends around the flat.
Mr de Andrade told Brazil’s UOL Esporte: ‘If the police investigation of the supposed break-in where she lives shows there was no break-in, I am leaving the case.
UEFA CHAMPIONS LEAGUE