Church in Bayelsa suspends couple’s wedding because they ate from the same plate while dating. 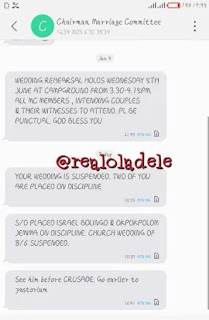 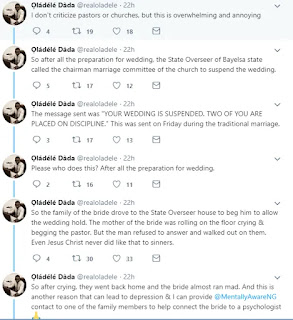 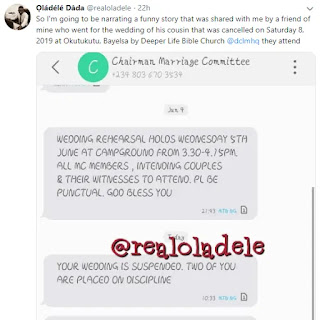 A couple's wedding was allegedly suspended by a branch of Deeper Life Bible Church in Bayelsa because the couple ate from the same plate while courting.
The couple were having their traditional wedding on Friday, June 7, when they received a text message from the chairman of the church's marriage committee informing them their wedding has been suspended and they are both placed on "discipline". According to Oladele Dada, who shared the story on Twitter along with a screenshot of the message sent by the church to the couple, the Deeper Life State Overseer for Bayelsa state was the one who called the chairman of the marriage committee of the church and asked them to suspend the wedding.
When the distraught bride and her crying mother went to the chairman of the marriage committee to beg for the marriage to hold as planned, the chairman allegedly walked out on them and the bride almost "ran mad". They were later informed that the wedding was cancelled because the couple ate from the same plate weeks ago and the church allegedly doesn't allow this until after the couple's wedding.
Read the story as narrated by @realoladele below.
Lagos NIGERIA