Kylian Mbappe is the most valuable player in Europe with teammate Neymar dropping almost out of the top 20 after recently losing up to €90 million in his transfer value.

If there was any chance of PSG selling Kylian Mbappe this summer then it's likely that the phone at the Paris club's offices wouldn't stop ringing for offers, because he's literally the most valuable player in Europe.

According to transfer boffins CIES Observatory, and their algorithm, the 20 year old is currently worth €252 million in the transfer market, €32 million more than second-placed Mo Salah.

Raheem Sterling is the only other player on the list worth more than €200 million with Lionel Messi in fourth on €167 million and Jadon Sancho rounding up the top five on €159 millions.

Age obviously plays into Mbappe's billing as top of the charts way ahead of Lionel Messi, as well as the fact that his contract has two extra years on that of the Argentina superstar, so it's not a reflection of the best player necessarily.

Premier League clubs will be very happy to see so many of their players fit into the top 10 and they make up many of the next 10 as well.

It's in that 10-20 bracket that both Neymar and Cristiano Ronaldo sit with it being revealed this week that the Brazilian had lost up to €90 million on his valuation just since the start of 2019.

Ronaldo's age no doubt adds to his value being as low as €118 million, although it's still more than what Juventus paid for him last year so they got a bargain.

Liverpool's Trent Alexander Arnold is the most valuable defender right now and teammate Virgil van Dijk is second on that list in 22nd overall, worth €112 million, just ahead of the goalkeeper union's most expensive player Alisson, worth €107 million. 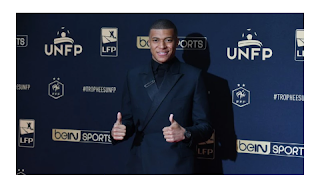 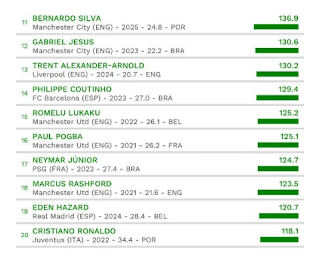