Bayelsa: Police move in search of kidnappers of Siasia's Mother

starsreporters.blogspot.com
A file photo of a police patrol vehicle. [Inset: Samson Siasia]. The police have confirmed the kidnap of Beauty Siasia, the mother of former Super Eagles coach Samson Siasia.

In a statement on Monday, spokesman for the Bayelsa State Police Command, Asinim Butswat, said the octogenarian was abducted by gunmen at a village in Sagbama Local Government Area of the state.

READ ALSO: Gunmen Abduct Samson Siasia’s Mother In Bayelsa “On 15 July, 2019 at about 0200hours, unknown gunmen who were heavily armed came through the waterways of the River Nun and invaded the residence of one Mrs Beauty Siasia, ‘f’ 80 years  in the riverine village  of Odoni, Sagbama Local Government Area, Bayelsa State and whisked her away through the waterways to an unknown destination,” the statement said.

According to Butswat, the Commissioner of Police in the state and the command’s Tactical Team has visited the scene of the crime.

He noted that the police in collaboration with other security agencies have launched a manhunt to apprehend the suspects and rescue the victim. 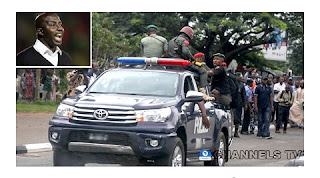