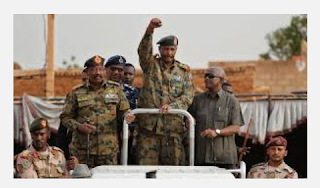 Sudans ruling military council (TMC) says it has foiled an attempted military coup and at least 16 officers have been arrested.

The development late on Thursday came as the TMC and protest movement leaders seeking a transition to democracy were in discussions over a power-sharing deal. "Officers and soldiers from the army and National Intelligence and Security Service, some of them retired, were trying to carry out a coup," General Jamal Omar of the TMC said in a statement broadcast live on state television. "The regular forces were able to foil the attempt," he said, but did not say when the attempt was made. "This is an attempt to block the agreement which has been reached by the Transitional Military Council and the Alliance for Freedom and Change that aims to open the road for Sudanese people to achieve their demands," Omar said, referring to the leading protest coalition.

The announcement came as the generals and protest leaders went through the details of the agreement at a luxury hotel in the capital, Khartoum.

No more details were immediately available.

The two sides agreed last week on a joint sovereign council that will rule for three years while elections are organised.

Both sides say a diplomatic push by allies was key to ending a standoff that raised fears of civil war.

David Shinn, former deputy chief of mission at US embassy in Sudan, told Al Jazeera that the coup attempt was not "too surprising". "There have been disagreements within the security forces since the beginning of this effort to change the regime in Sudan," he said. "I don’t see this as all that unusual. You have a very volatile situation in Sudan today, and it’s not too surprising that there are going to be setbacks. There are going to be disagreements on both sides." Sudan has been in political deadlock since the overthrow by the military of autocratic President Omar al-Bashir in April in the wake of months-long pro-democracy protests.