INSIDE LEKKI: BABY FALL OFF MOTHER'S BACK AND WAS CRUSHED BY BUS 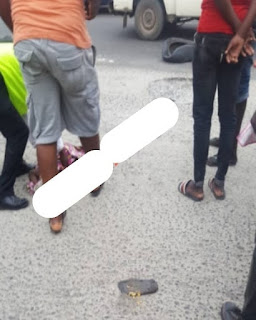 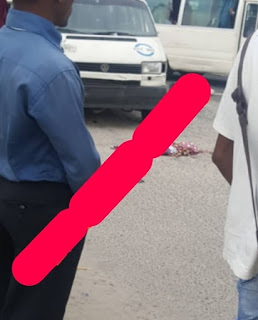 An infant was crushed to death by a bus as the child's mother was crossing the road with her kids at Elf bus stop, Lekki.
According to eye witnesses, the mother was carrying the infant and held another child by the hand as she crossed the road. At the same time, a bus was allegedly being chased by police and the speeding bus failed brake and started heading towards the mother and her children.
The mother, noticing what was going on, managed to push one of her children to safety. In the confusion, the infant on her back fell to the road and was crushed by the speeding bus.  
Seeing that a child had been crushed and the child's brain splattered on the road, the police men chasing the bus allegedly ran away from the scene. The driver of the white bus (pictured) also escaped.
According the eye witnesses, the mother of the infant could not bear the sight and momentarily went crazy. She was rushed out of the scene by witnesses. Reports say she was taken to a hospital.  
Another group of police officers later arrived the scene and put the baby's body into the white bus that crushed the child, then left the scene of the accident.
The tragic incident took place between 4:30pm and 5pm on Tuesday, July 9, 2019. A
Africa Lagos NIGERIA