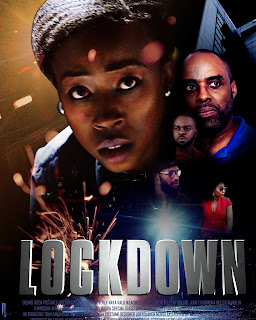 Olumo Rock Pictures Limited has released the official trailer for their most anticipated film titled ‘’Lockdown’’ and it stars many of Nollywood’s finest actors.
Directed by Ladi Akinyososye, the movie stars Beverly Naya, Kalu Ikeagwu, Linda Ejiofor Suleiman, Kelechi Udegbe, Jude Chukwuka, Bucci Franklin, Harry Dorgu, Jerry Bakpa, Tunbosun Aiyedehin and Tomi Fabamigbe, with special guest appearances by Dele Odule, Sola Onayiga and Tallulah Doherty.
Lockdown follows the story of a group of people trapped in a heist at the Quarterly Bank of Commerce by a criminal gang determined to open the vault before daybreak. ‘We wanted to make a film that was different from most films that are being shown now, a film that was an action film, and also at the same time, a family movie, with a strong female protagonist at the centre. Nollywood is always pushing the envelope, so we crafted a good story, got a stellar cast, a solid crew and I believe we’ve made something special. It has its thrills, its suspenseful moments and its laughs and we hope everyone enjoys it.’ Director, Ladi Akinyosoye said.
Lockdown is set to hit cinemas nationwide from the 20th of September 2019.
Lagos NIGERIA