NEWS: Suspected male thief who dressed up in hijab apprehended inside a female hall in Kano. 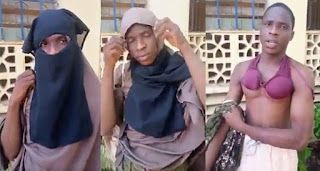 starsreporters.blogspot.com
A suspected male thief who dressed up in a hijab in an attempt to disguise and steal inside the female hostel of the Federal College of Education, Kano state, was apprehended yesterday Sunday July 7th.
Security officers at the entrance of the hostel, intercepted him when they suspected the unusual way he was walking and also feigning his voice.
He was discovered to be man after he stripped of his clothing.
Watch a video of him shortly after he was paraded below

FUTO student nabbed while trying to use coursemate for ritual ''Heavily pregnant '' TBoss spotted at a medical diagnostic center in Abuja....see photos

Elisha Abbo clashes with Tinubu over sex toy shop assault (video) "Good to be black. Missed my melanin" Vera Sidika says as she goes back to her original skin color but fans are not having it

Actress, Angela Okorie claps back at IG users including an elderly woman who came for her for wearing a revealing swimsuit to the pool (Video)