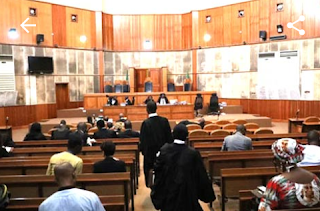 The late filing of an application by lawyers to the presidential candidate of the Peoples Democratic Party (PDP), Atiku Abubakar and the PDP on Tuesday stalled the planned hearing of an appeal they filed against the decision of the Presidential Election Petitions Tribunal.

The appeal is against a ruling of the Tribunal, in which it held that the former vice president and his party do not have a reply to an application filed on May 14, 2019, by the All Progressives Congress (APC).

APC, in its application, is seeking among others the dismissal of Atiku and PDP’s petition challenging President Muhammadu Buhari’s victory at the last presidential election.

When the appeal, marked: SC/738/2019 was mentioned, lead lawyer to the appellants, Mr Paul Erokoro, said he regretted that he filed a fresh “application this morning” for leave to bring supplementary records from the lower court.

Lawyers to the respondents – the Independent National Electoral Commission (INEC), Yunus Usman (SAN), Wole Olanipekun (SAN), for President Buhari, and Lateef Fagbemi for the APC respectively, said they were just served with the application and needed time to examine it and react appropriately.

Thereafter, a five-man panel of the apex court, led by Justice Mary Peter-Odili, adjourned until August 20, 2019 for the hearing of the appeal.

The APC through its counsel had filed a motion in which it pleaded with the Tribunal to strike out names of 10 states and some individuals in the PDP’s petition on the ground that sufficient claims known to the law were not made against them.

It also asked the Tribunal to strike out the name of the Vice President, Professor Yemi Osinbajo; the Chief of Army Staff, Lieutenant General Tukur Buratai; the Nigerian Army and the police among others from the petition on the ground that they were not made defendants in the petition.

Although Atiku’s lawyers filed strong objection against the motion at the Tribunal, they did not file counter affidavit to support
Africa Lagos Naija NIGERIA Politics