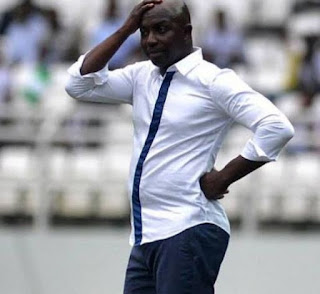 This is bad for Nigerian?football - Actress, Uche Jombo reacts to Samson Siasia
Samson Siasia, a former Nigerian football player and National team coach, has been banned for life by world governing body, FIFA, after he was found guilty of match fixing.
Reacting to the news, Nollywood actress, Uche Jombo Tweeted; 'this Samson Siasia matter is bad for naija football...handed a life ban by FIFA and fined $50k for "accepting" to take bribes to manipulate games'.
See more reactions below....
This Samson Siasia matter is bad for naija football...handed a life ban by FIFA and fined $50k for "accepting" to take bribes to manipulate games.
?Accepting?
— Uche Jombo Rodriguez (@uchejombo) August 16, 2019
This ban on Siasia is the right thing to do but it would not stop the bribe collection in Nigeria coaches. This Samson Siasia bribe is tracked because he went a step further into match fixing. Question is, the collection of bribe to select players, who fix or punish that? pic.twitter.com/5u88Ks1OoT
— EDAFE MATTHEW ESEOGHENE (@ELEGBETE1) August 16, 2019
So I heard that Samson Siasia is banned from any football related activity both nationally and Internationally.
Me: Can he still play Fifa19 or PS4 ? ? ? pic.twitter.com/gaLdOmpMb5
— Abel Blacks (@blackzz08) August 16, 2019
Samson Siasia should have moved with me to APC. But he chose to remain where he was, now he has been banned for life. Same thing @officialEFCC planned to do to me but for my Uncommon escape to APC. Come into @OfficialAPCNg all ye who are burdened with guilt. #FridayThoughts pic.twitter.com/d3L0wYHgqq
— Akpabio (@AkpabioParody) August 16, 2019
When you realize the match Samson Siasia fixed is the only match that cut your 200k ticket pic.twitter.com/cW2btJQMHJ
— Slimkally (@Slimkally) August 16, 2019
Handed a life ban by FIFA on Friday, ex-#Nigeria forward and coach Samson Siasia has denied any wrongdoing & says he will fight to clear his name.
Siasia to @ColinUdoh: "I don't know anything about this. I did nothing wrong and I have not received any letter from FIFA." pic.twitter.com/CniA1ZONuW
— Oluwashina Okeleji (@oluwashina) August 16, 2019
Hits blunt*
Is Sia marries Samson Siasia,she will become Sia Siasia. pic.twitter.com/2TzuwIqSll
— Nigerian Soul and Vibes (@Fola_Biyi) August 16, 2019
Now that Samson Siasia has been (rightly or wronglY) banned from football, what happens to the name of the Yenagoa Township Stadium, also known as the 'Samson Siasia' Stadium? pic.twitter.com/biRDZfQ7yO
— Mr. Aye Dee (@MrAyeDee) August 16, 2019
by Linda Ikeji at 16/08/2019 8:32 PM|16 Comments
Share this Story
Most Read Stories
Comments (16)
Disclaimer
Comments expressed here do not reflect the opinions of lindaikejisblog.com or any employee thereof.
Emmanuel Kachi about 2 hours ago
Really bad.. Like I care? #kachi
Kelvin smith about 2 hours ago
Is so so bad
Mr Melvin about 2 hours ago
Well, Samson Siasia has said he doesn't know what u guys are talking about and hasn't received any letter. Black man will lie and lie and lie. Even if u show him CCTV he will say it's not him that he was sleeping at home
SAINT TYNII about 2 hours ago
Wetin this Mgbeke know?