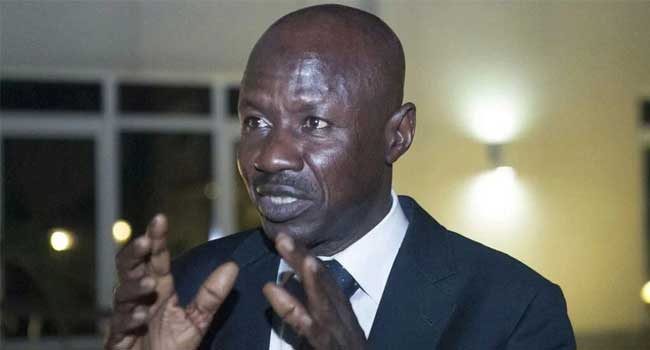 The Acting Chairman of the Economic and Financial Crimes Commission (EFCC), Mr. Ibrahim Magu has said that oil thieves in the Niger Delta will find it tough to sabotage Nigeria’s economy through their nefarious acts, stating that the agency will not relent in fighting it.
Mr Magu who was in Port Harcourt, the Rivers State capital gave the warning during a working visit to Zonal Office of the Commission.
In a statement by the Head, Media and Publicity of the Anti-graft agency, Mr Wilson Uwujaren, said that the EFCC boss warned the illegal oil thieves in the Niger Delta to desist from acts of oil theft and economic sabotage.
“Let me also use this medium to warn all illegal oil bunkers to desist from their nefarious operations.  The EFCC is resolute in its fight against economic sabotage and oil theft.
“The Niger Delta is highly significant to our national economy and the Commission will continue to do all that is lawful and patriotic in ensuring that operators of illegal oil bunkering are brought to book.”
READ ALSO: Nigeria Yet To Ratify 400 Treaties Signed By Successive Govt – Reps Member
The EFCC Chairman also paid an inspection visit to the 6th Division, Nigerian Army in Port Harcourt, where vehicles forfeited to the Federal Government by illegal oil dealers are being parked.  Magu explained that all the forfeited vehicles belong to the Federal Government and the processes for their auction are still ongoing.
“All the vehicles forfeited belong to the government. The processes are ongoing.  We are following processes stated in the Procurement Act. We are not hiding anything. All the vehicles auctioned are still there.  The auction processes continue until payments and reconciliation are made,” he said.