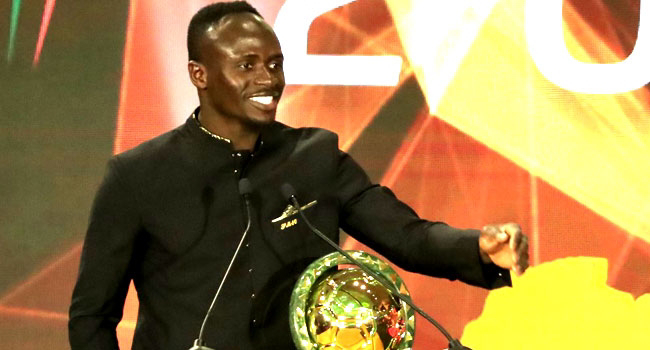 Senegal winger Sadio Mane speaks after winning the Player of the Year award during the 2019 CAF Awards in the Egyptian resort town of Hurghada on January 7, 2020. Khaled DESOUKI / AFP

Liverpool star Sadio Mane was crowned on Tuesday as Africa’s 2019 Player of the Year for the first time at an awards gala in Egypt on Tuesday.

The 27-year old Senegalese striker was up against his Liverpool teammate Mohamed Salah, the Egyptian who won the award the last two years, and Algerian Riyad Mahrez of Manchester City.

“I am really happy and at the same time I am really proud to win this award,” said Mane at the ceremony organised by the Confederation of African Football in the Egyptian Red Sea city of Hurghada.

Mane scored 34 goals and produced 12 assists in 61 appearances in 2019, according to CAF statistics.

Neither Salah nor Mahrez, who was playing for Manchester City, attended the CAF’s awards gala on Tuesday.

Another Feat For Oshoala
In the female category, Super Falcons’ Captain Asisat Oshoala was named as the 2019 African Women’s Player of the Year.

Oshoala, who plays for Spanish side Barcelona, beat Ajara Nchout of Cameroon and South Africa’s Thembi Kgatlana, who was crowned in Senegal last year to claim the title.

It is the fourth time the 25-year-old is being crowned the best African female footballer.

Shortly after she was announced as the winner, Oshoala took to Twitter to thank her family and friends, as well as her fans and colleagues locally and internationally for their support.

Grateful to be African Women’s Player of the year for the 4th time. Thank God, my Family, Friends and Fans for the support. Big shoutout to my club , my management , team mates at both national team and club level and of course thanks to @CAF_Online for the opportunity ❤️❤️🙏🏾

The award for the youth category was given to Morocco’s Achraf Hakimi of Borussia Dortmund.

The Egyptian Football Association won the Federation of the Year award.