How Osama bin Laden was shot: 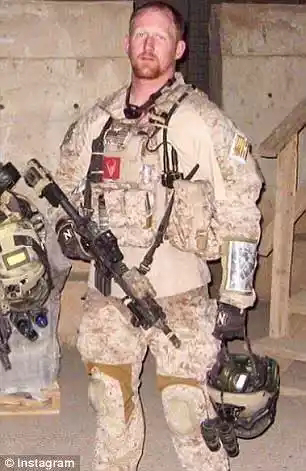 How former US Navy seal member fired the shot that killed osama
vdanceFeb 18, 2020Read original
The United States Navy Sea, Air, and Land Teams, commonly known as Navy SEALs, are the U.S. Navy's primary special operations force and a component of the Naval Special Warfare Command.
There one of the most toughest military section in the world...
SEALs are primarily tasked with surveilling, capturing, or killing of high priority targets, and gathering intelligence behind enemy lines on enemy forces, locations. They can enter infiltrate any country without your government knowing. There the best in the world.
Robert James O’Neillwas a former frogman who claims to have fired the shot(s) that killed Osama bin Laden during the raid on his Abbottabad compound on May 1, 2011.

Osama bin Laden, the founder and first leader of the Islamist terrorist group, Al-Qaeda, was killed in Pakistan on May 2, 2011. On may 1, 2011 at 20.00 hr. The United States Navy SEALs also known asDEVGRU or SEAL Team Six.Code-named Operation Neptune Spear, was carried out in a CIA-led operation with Joint Special Operations Command, commonly known as JSOC, coordinate a Special Mission Units involved in the raid.
The operation ended a nearly 10-year search for bin Laden, following his role in the September 11 attacks on the United States.
The raid on bin Laden's compound in Abbottabad, Pakistan was launched from Afghanistan. U.S. military officials said that after the raid U.S. forces took the body of bin Laden to Afghanistan for identification, then buried it at sea within 24 hours of his death in accordance with Islamic tradition. Former seal member Robert James O’Neill is one of dozens of U.S. special operators to storm bin Laden’s hideout on May 2, 2011, said he mentally prepared himself to face death from heavily armed gunmen or from the elaborate booby traps that would surely line the approaches to the al-Qaeda leader’s inner sanctum.
What he never expected was that he would secure a place in history that night, as the man who fired the bullet that ended bin Laden’s life.
O’Neill confirmed to The Washington Post that he was the unnamed SEAL who was first to tumble through the doorway of bin Laden’s bedroom that night, taking aim at the terrorist leader as he stood in darkness behind his youngest wife. In an account later confirmed by two other SEALs, the Montana native described firing the round that hit bin Laden squarely in the forehead, killing him instantly.
More than three years after the events, O’Neill agreed to publicly discuss his role for the first time, describing in unprecedented detail the mission to capture or kill the man behind the Sept. 11, 2001, terrorist attacks on New York and Washington.
O’Neill’s involvement in the 2011 bin Laden raid capped a career that had already been extraordinary, by any measure. Tall and athletic with boyish features and reddish-blond hair, O’Neill became a SEAL in 1996 at age 20, and was eventually promoted to elite SEAL Team Six.
He eventually received 24 honors and commendations, many of them earned for multiple tours in Iraq and Afghanistan, as the leader of missions to capture or kill suspected al-Qaeda-allied insurgents.
Between tours, his team was pressed into service for rescue missions in far-flung corners of the world. O’Neill was among the SEALs who assisted in the 2009 rescue of merchant marine Capt. Richard Phillips from pirates off the coast of Somalia, an operation depicted in the 2013 movie “Captain Phillips.”
America International Scene UN USA