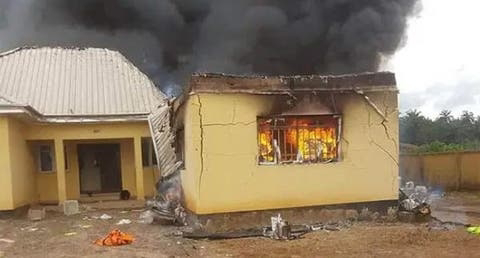 It was gathered that the hoodlums equally vandalized the community’s health centre.

Gunmen burn down another police station, high court in Imo

The razing of the building was said to have taken place between 1 and 2am.

According to source, the invaders shot repeatedly for close to an hour before setting the government facilities in the community ablaze.

The crown prince of the community, Remigiius Azike, told The Punch that the incident took place when the villagers had gone to bed.

“I was the one who built the police station and the magistrate court and mobilised youths under the auspices of Transformations Ambassadors of Atta Nwambieri to build the high court. I did this so that our people will have access to government facilities.

“This latest incident is coming a week after they razed the house of our president general and killed his wife. The government should come to our rescue,” he said.