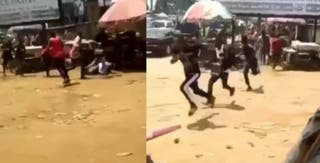 The attack happened in different areas of the state including Orji, Okigwe road, and Douglas road as the unknown gunmen stormed the streets, shooting sporadically into the air.

Video of the gunmen roaming the streets and shooting into the air has gone viral on social media.

Meanwhile, the reason for the attack is yet to be uncertain by the state government but witnesses says that the newly rebuilt Orji police station was burnt down during the attack.