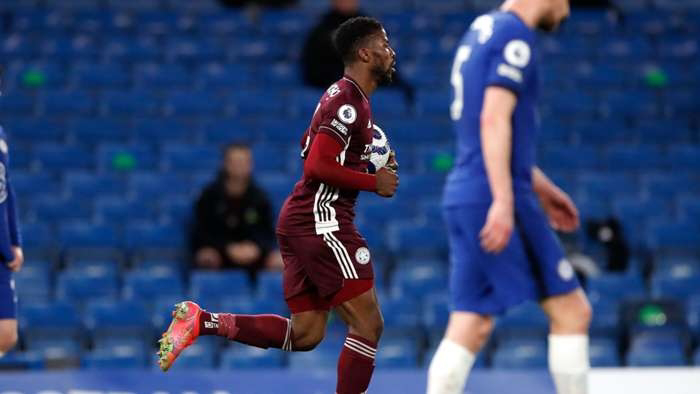 Thanks to his effort against Thomas Tuchel’s men, the Nigeria international achieved a landmark in the English elite division

Kelechi Iheanacho has become the first player in Premier League history to score a goal on all seven days of the week within a single season.

The striker was on target for Leicester City as they suffered a 2-1 defeat to Chelsea in Tuesday’s league encounter.

With the hosts taking a two-goal lead through Antonio Rudiger and Jorginho, Iheanacho was introduced for James Maddison on the hour mark.

In the 76th minute, he reduced the deficit for Brendan Rodgers’ Foxes. Receiving a pass from compatriot Wilfred Ndidi, Iheanacho knocked the ball calmly into the bottom right corner of Edouard Mendy’s goal.

As a result of that effort, he wrote his name in the English elite division’s history books.

7 - Kelechi Iheanacho is the first player in Premier League history to score a goal on all seven days of the week within a single season in the competition. Heaven.

Furthermore, the 24-year-old now boasts 12 goals in 24 outings so far in the 2020-21 campaign. Overall, he is Leicester’s highest goalscorer in all competitions this term with 19 goals – four more than veteran Jamie Vardy.

Having lost 1-0 to the King Power Stadium giants in Saturday’s FA Cup final, Thomas Tuchel’s men came into the game hoping to avenge their defeat as well as dent the visitors’ Champions League ambitions.

Eleven minutes before the half-time break, Timo Werner headed Cesar Azpilicueta’s corner kick past goalkeeper Kasper Schmeichel. However, the effort was chalked off as VAR claimed the German international accidentally handled the ball as he guided it into the net.

Two minutes into the second half, Rudiger put the Blues in front. Ben Chilwell’s corner nicked off of a Leicester defender into the 28-year-old's path, who bundled the ball into the net.

The German centre-back has now scored more Premier League goals against the Foxes than he has against any other team, with each of his last three in the competition coming against Rodgers’ side.

In the 66th minute, Jorginho doubled the hosts’ advantage from the penalty mark after Wesley Fofana hacked at Werner inside the box.

While Ndidi was in action from start to finish, but Ghana’s Daniel Amartey and Senegal’s Nampalys Mendy were unused substitutes.

Chelsea's victory lifted them to third in the Premier League, just one point above Leicester City who occupy the fourth spot.