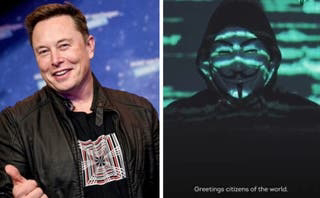 The ‘Hacktivist’ group Anonymous on June 5, posted a video on their YouTube which sent the internet reeling.

The video entitled, ‘Anonymous message to Elon Musk.’ has generated over 700,000 views on the platform and is currently trending on social media platforms.

In the 3 minutes and 47 seconds long video, the international hacking group threatened to target and expose Elon for fluctuating and causing the price of Bitcoin to plunge with his tweets.

The group said that the Billionaire has too much power over the cryptocurrency markets and that they had grown tired of his attitude and tantrums.

In their video to Elon, Anonymous said;

“People are beginning to see you are nothing more than another narcissistic rich dude who is desperate for attention.”

“Millions of retail investors were really counting on their crypto gains to improve their lives.”

“You were born into the stolen wealth of a South African apartheid emerald mine and have no clue what struggle is like for most of the working people in the world.”

“As hardworking people have their dreams liquidated over your public temper tantrums, you continue to mock them with memes from one of your million dollar mansions.”

Twitter is filled with mixed reactions from the Anonymous video to Elon. While some appears to be defending the group, others defended the billionaire.