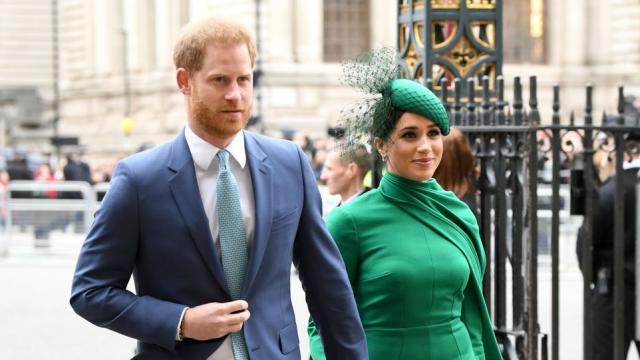 Archie Harrison Mountbatten-Windsor may or may not get a title, depending on exactly what Prince Charles plans on doing with the royal family when he ascends the throne, but according to the U.K. newspaper the Telegraph, Prince Harry and Meghan Markledecided not to give their son a particular title when the chance arose.

Back in 2018, before Harry and Meghan got married, Queen Elizabeth gave her grandson the title Earl of Dumbarton and reports state that Archie could have inherited the title. Meghan and Harry nixed the idea, reportedly saying that they didn't want their son to be objected to jokes about being "dumb."

Harry's official titles include The Earl of Dumbarton when he's in Scotland, Baron Kilkeel in Northern Ireland, and His Royal Highness The Duke of Sussex, which he also inherited when he married in 2018.

"They didn't like the idea of Archie being called the Earl of Dumbarton because it began with the word 'dumb' [and] they were worried about how that might look," a source told the Telegraph. "It wasn't just Meghan who pointed out the potential pitfalls, it also bothered Harry." The newspaper also noted that several sources confirmed the news.

RELATED: Prince Harry and Meghan Markle Registered Domains Under Lilibet Diana's Name Prior to Her Birth

According to Page Six, the earldom (named for a town in Scotland) was created in March 1675 and when news broke that Harry and Meghan didn't want to pass the honorific to their son, the area's citizens were understandably upset.

"What an insult to Dumbarton," resident Sue Sutton-Smythe tweeted in response to the Telegraph article.

What an insult to Dumbarton 😡

The issue of Archie's title came up during the Sussexes' sit-down with Oprah, when Meghan mentioned that she feared that her son wouldn't have security if he didn't have a title. Before the interview, reports stated that Harry was fine with Archie being title-free, saying that his children "should be raised without titles."