Inside the safe, according to the FBI special agent, the officers found hard drives, CDs, diamonds, and passports belonging to Epstein.

Kelly Maguire, the FBI special agent and leader of the team that searched Epstein's home on July 6 and 7, 2019, testified Monday about what the team found. The search was conducted as part of a search warrant executed a few days before Epstein's arrest on sex trafficking charges. Maguire said her team forced their way into the building after no one answered when they rang.

Federal prosecutors previously alludedto the contents of the safe in 2019, when they sought to have a judge deny Epstein's bail application later that month. They said agents found $70,000 in cash, 48 loose diamonds and other jewelry, and a passport from a foreign country with a picture of Epstein under another name in the safe.

But this is the first time Justice Department officials have mentioned the hard drives in the safe.

It is also the first time any official has described the inside of Epstein's eight-story, 19,000-square-foot home, or discussed the CDs filled with photos elsewhere in the building.

Prosecutors say Maxwell trafficked girls for Epstein to sexually abuse in the Upper East Side mansion, as well as in Epstein's homes in London, the US Virgin Islands, and Palm Beach, Florida. Maxwell has pleaded not guilty to the charges. Epstein died by suicide in jail while awaiting trial.

Maguire, a member of an FBI Child Exploitation and Human Trafficking Task Force, testified Monday that her team found the safe in a dressing room on the building's fifth floor. The mansion had forty rooms and took about 12 hours for her team to fully search.

Asked by a prosecutor at the trial whether the safe was open, Maguire answered: "We brought a saw."

Prosecutors showed jurors and members of the public a photo of the safe, dragged by FBI agents to the middle of the dressing room. The hard drives Maguire said were found inside were piled on top of it. It also held jewelry, diamonds, CDs, and multiple passports, Maguire testified.

Maguire said that the scope of the search warrant didn't permit the agents to seize the hard drives and CDs, so she left them atop the safe.

When she got a broader warrant and returned to retrieve them, they were gone. 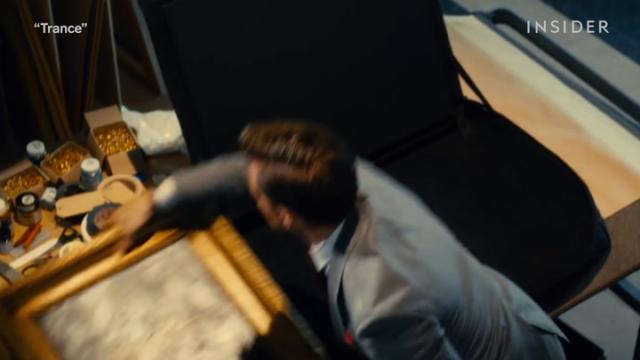 There are many art heist movies involving elaborate schemes like "Ocean's 8" and "The Thomas Crown Affair," but these films aren't very accurate.

Maguire called Richard Kahn, one of Epstein's attorneys, and informed him she had a warrant for the hard drives and CDs.

Kahn came to her office minutes later lugging two suitcases with the items, she said. Maguire said members of her team checked to ensure they were the same hard drives and CDs found during the first search warrant execution.

Prosecutors blacked out images of binders full of photos

Prosecutors presented several photos of the inside of Epstein's home, including a marble-floored entrance hall with a large, dark wooden staircase and a gilded fireplace, and a room with a massage table with hideous yellow and blue patterned wallpaper and dark pink curtains. Prosecutors say Epstein sexually abused girls in the midst of massages.

In a closet on the building's fifth floor, FBI agents had also found a shelf full of large black binders. The binders held CDs, carefully categorized in plastic slipcovers and thumbnails with photos on them. The FBI later found that the thumbnails corresponded with photo files on the CDs, Maguire said.

Prosecutors presented members of the public with a photo of the binders after submitting them as evidence, but blacked out "homemade labels" because of what US District Judge Alison Nathan ruled was "identifying information for third parties." The unredacted versions of the photos were submitted under seal and shown only to jurors.

On the first floor, agents also found a plastic bin tucked under a bookshelf in an office. The bin was filled with hard drives.

The hard drives all had tamper-proof "evidence" tape on them when the FBI found them, Maguire testified.

According to Joseph Recarey, a Florida detective who executed a search warrant on Epstein's Palm Beach home as part of an investigation in 2005, hard drives had gone missing shortly before officers entered the home at the time. Epstein later pleaded guilty to solicitation charges in connection with that investigation.

"Six computer hard drives in the house had been hastily removed, leaving dangling wires attached to monitors in several areas of the house," Recarey told Miami Herald investigative reporter Julie K. Brown for her book "Perversion of Justice." It's unclear if these are the same hard drives.

Before stepping down from the witness stand Monday afternoon, Maguire testified she didn't know why some were already marked as "evidence."

Prosecutors indicated they would present another witness with knowledge about the hard drives later in the trial.

Read the original article on Insider