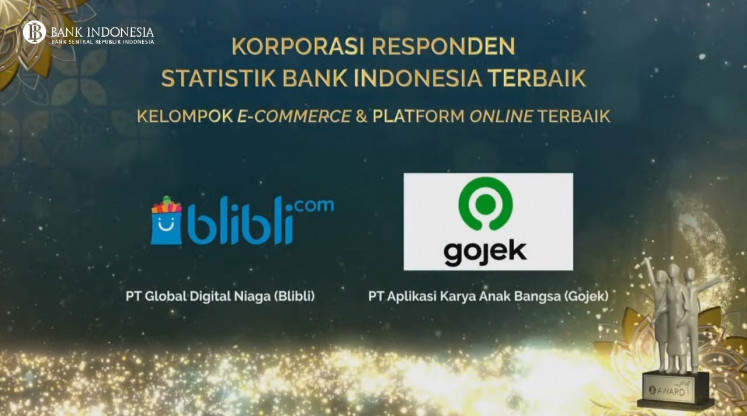 Gojek has won the award for best e-commerce firm and online platform in Indonesia at the 2021 Bank Indonesia Awards. The prestigious accolade was given during this year's Annual Meeting of Bank Indonesia (PTBI).

Gojek CEO Kevin Aluwi said, “We are honored to receive this recognition from Bank Indonesia for our commitment to leveraging technology to remove life's daily frictions. This award motivates us to continue to innovate and enhance the experience of our customers, driver partners and merchant partners to solve their daily challenges and improve their quality of life.”

The company’s win can be attributed to Gojek's contribution to the country's national economy. According to a recent study by LD FEB University of Indonesia, the Gojek and GoTo Financial ecosystems are estimated to have contributed 1.6 percent to Indonesia's GDP this year, the equivalent of Rp 249 trillion, a 60 percent increase from the company's earnings last year.

The award also reflects the synergy between the country's central bank and economic actors, the government, the Financial Services Authority (OJK) and the Deposit Insurance Corporation (LPS) in an effort to support the national economic recovery while maintaining macroeconomic and financial system stability.

The theme of the annual event is different each year. This year's meeting was themed “Awakened and Optimistic: Synergy and Innovation for Economic Recovery”. Along with governor Perry, the event was attended by President Joko “Jokowi” Widodo.

At the event, President Jokowi spoke at length about the future, adding that he was optimistic about the economic recovery and coming out of the pandemic slump, although he is still wary of COVID-19.

In his speech, Jokowi stressed the importance of MSMEs’ participation in driving national economic growth. "We have to make it easier for MSMEs to transition into the digital economy so that our MSMEs can be optimal," Jokowi said.

Gojek has also championed MSMEs throughout the country with various projects, as well as by giving them an online platform to grow their businesses. The study by UI also revealed that MSME partners of GoFood experienced an average increase in income of 66 percent.

Moreover, the application has also given a new opportunity for people to earn an income. GoCar and GoRide driver partners experienced an average income increase of 24 percent and 18 percent, compared to the previous year. The increase is also parallel to President Jokowi and Governor Perry's belief that the economic recovery has begun for Indonesia.

This year, Gojek shared the prize for the best e-commerce and online platform award with Blibli, one of Indonesia's online shopping platforms.